These tools at Smith’s Tavern are three nutmeg grinders or graters, that were used to grate or grind nutmeg seeds.

Nutmeg became an essential seventeenth-century ingredient consumed medicinally and as a culinary delight.  First introduced in England during the seventeenth century, nutmeg graters were fabricated in ever increasingly, imaginative shapes and styles.  Less costly, primitive nutmeg graters were made from wood, tin, and iron. The social custom of carrying a nutmeg grater in the pocket spread throughout all culture-seeking societies, to include the American Colonies, and nutmeg was used when flavoring 17th and 18th-century alcoholic beverages such as punches, toddies, ales, wines, syllabubs, and flips.

By the mid-nineteenth century, the price for nutmeg became moderately priced.  The study of mid-Victorian and American Civil war cookbooks shows that one out of five recipes contained nutmeg as a flavoring.  The use of the spice was prevalent in everything from pumpkin pie and rice pudding to venison broth and ketchup. Even a concoction to treat baldness with nutmeg is known.  From the 1850s to the 1920s an astonishing array of technologically improved nutmeg graters were patented from across America. Each product attested to be superior to the last, all designed to complete a simple chore without abrading the user's fingers.  While a handful of mechanical nutmeg graters were success stories, most were short-lived failures.

The first item (T195) is called the “Champion” invented by C.L. Gilpatric (patent # 58632).  It is made mostly of wood with brass and metal fittings including a crank handle on the side.  The seed would be dropped into the brass-lined hole in the center of the device with the powder coming out the end.

The second item (T196) is called the “Rajah” or “Standard” nutmeg grater.  It has a turned wood handle with a tin body and wire metal crank handle. There is a spring-loaded knob that is pulled back to load the nutmeg and maintains pressure against the grating wheel.

The third item (T197) is a design that was manufactured by many different companies; however, despite that statement, no further information was discovered in our research about this particular device.

If anyone knows anything about this particular nutmeg grater, please email the Historical Society with this much-needed information. 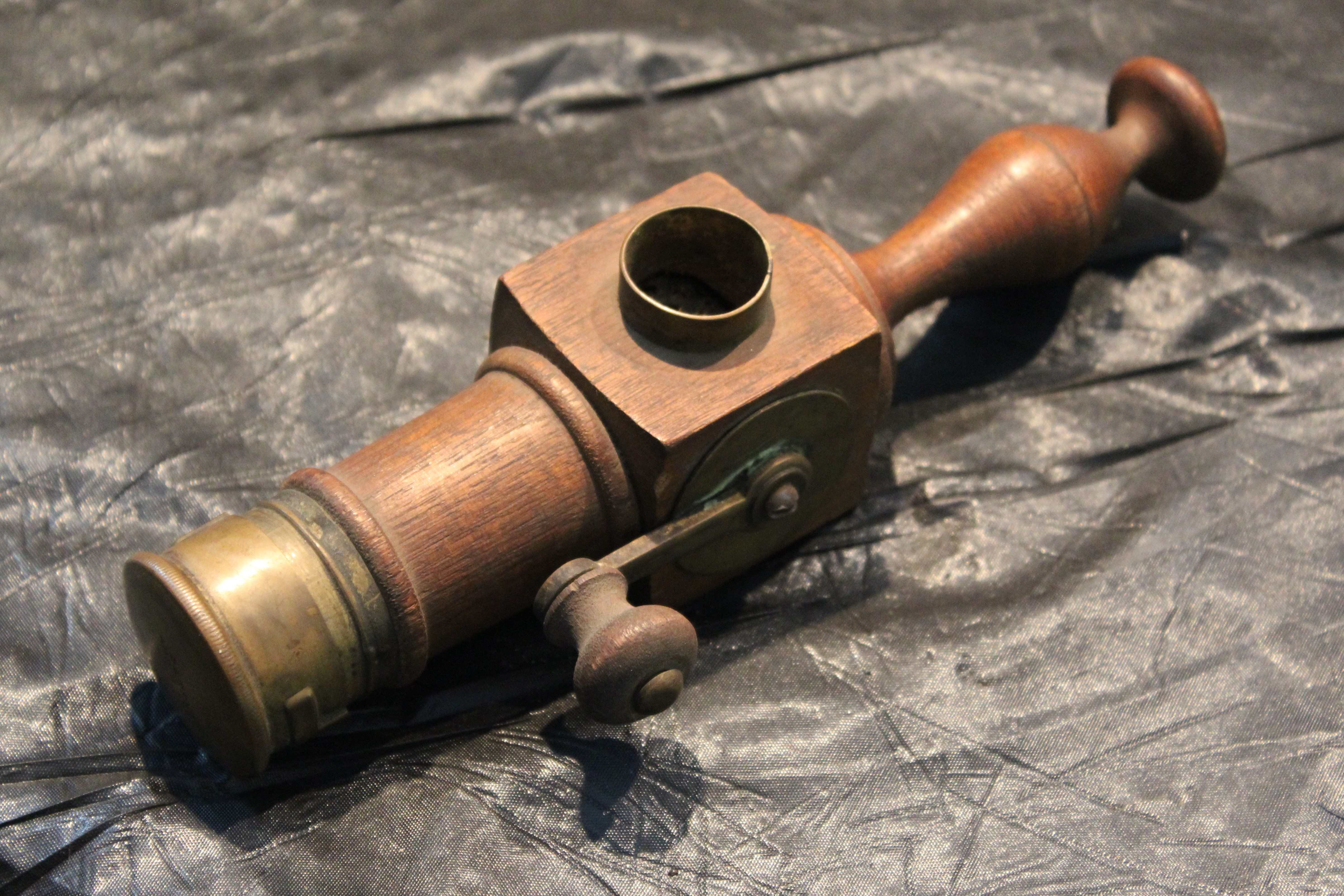 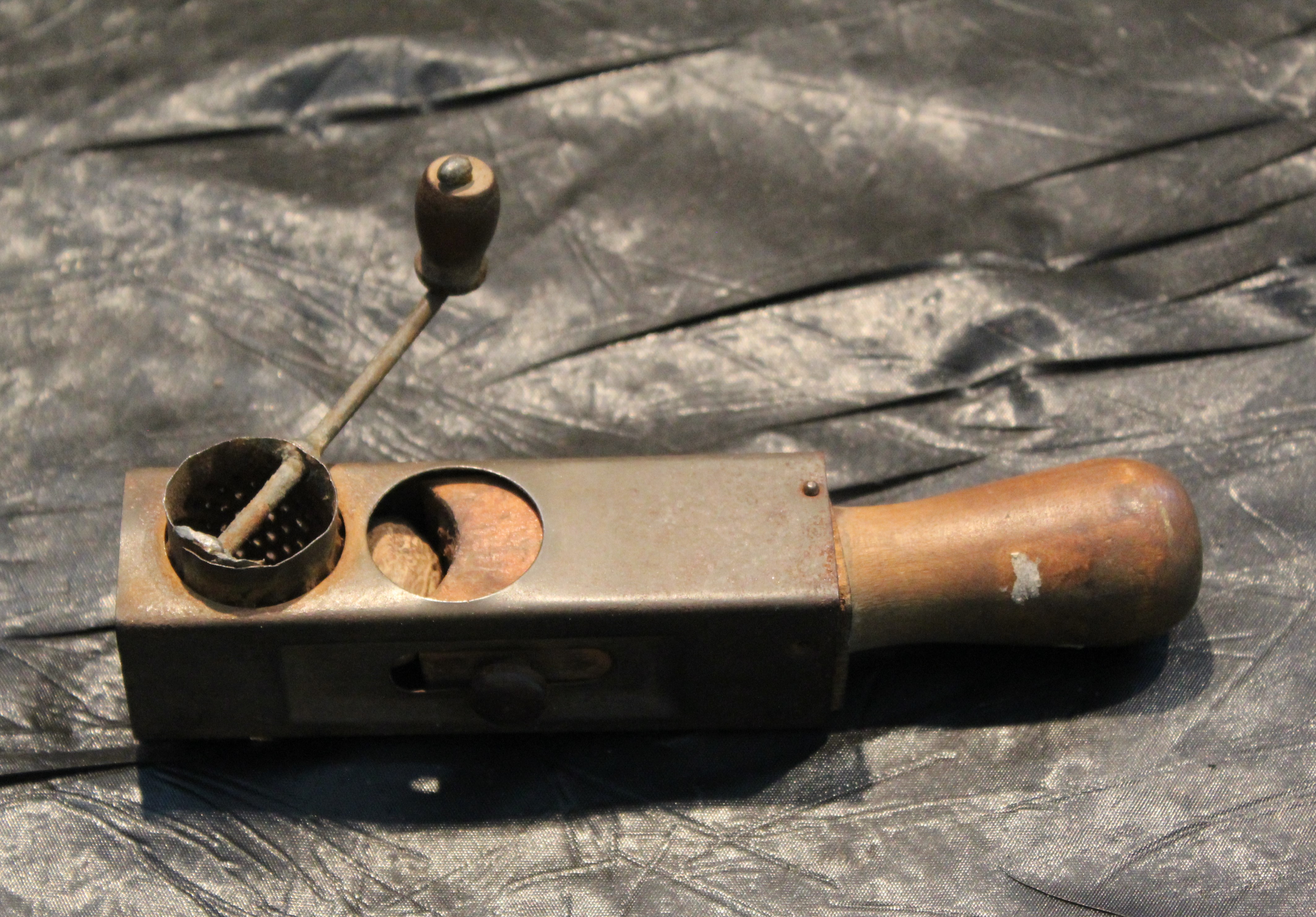 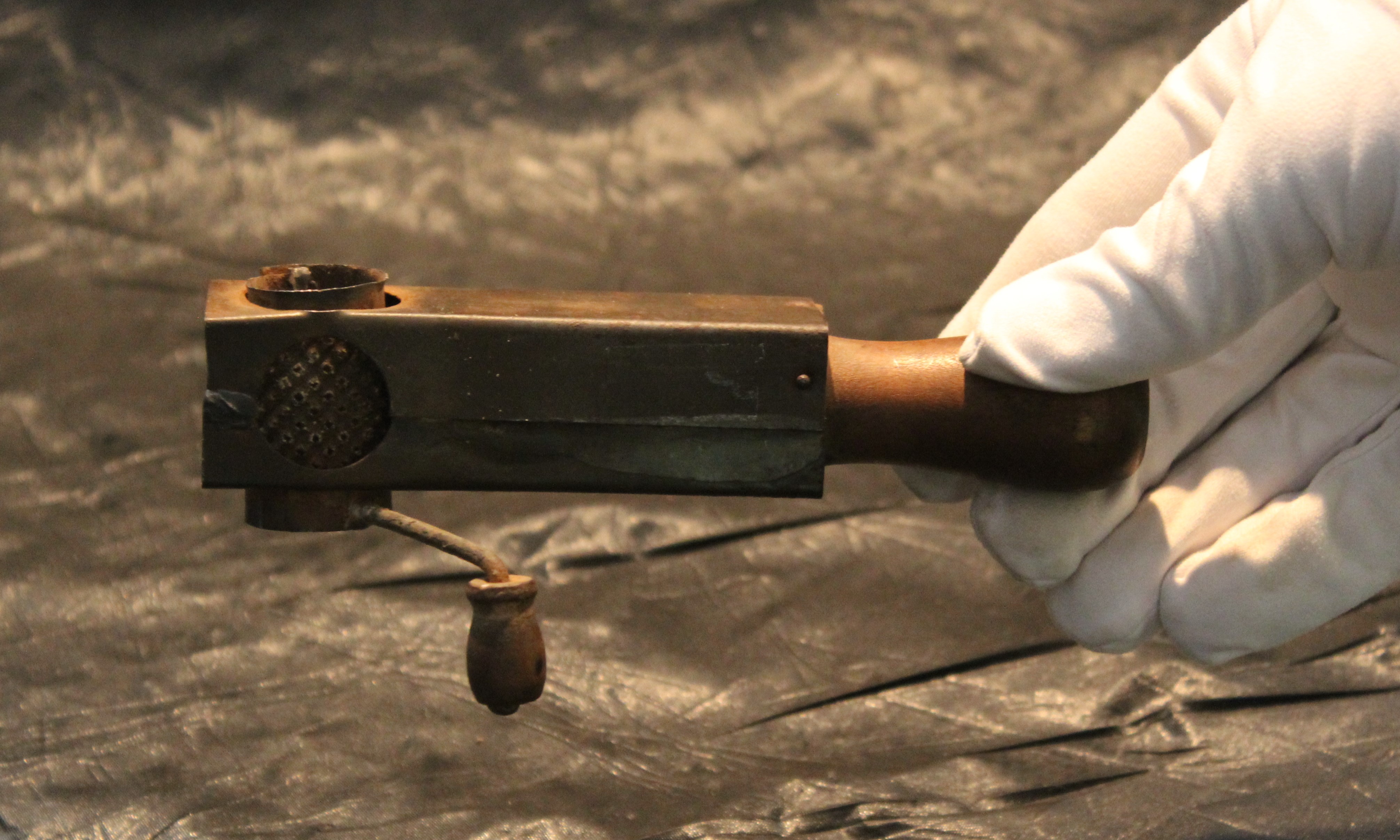 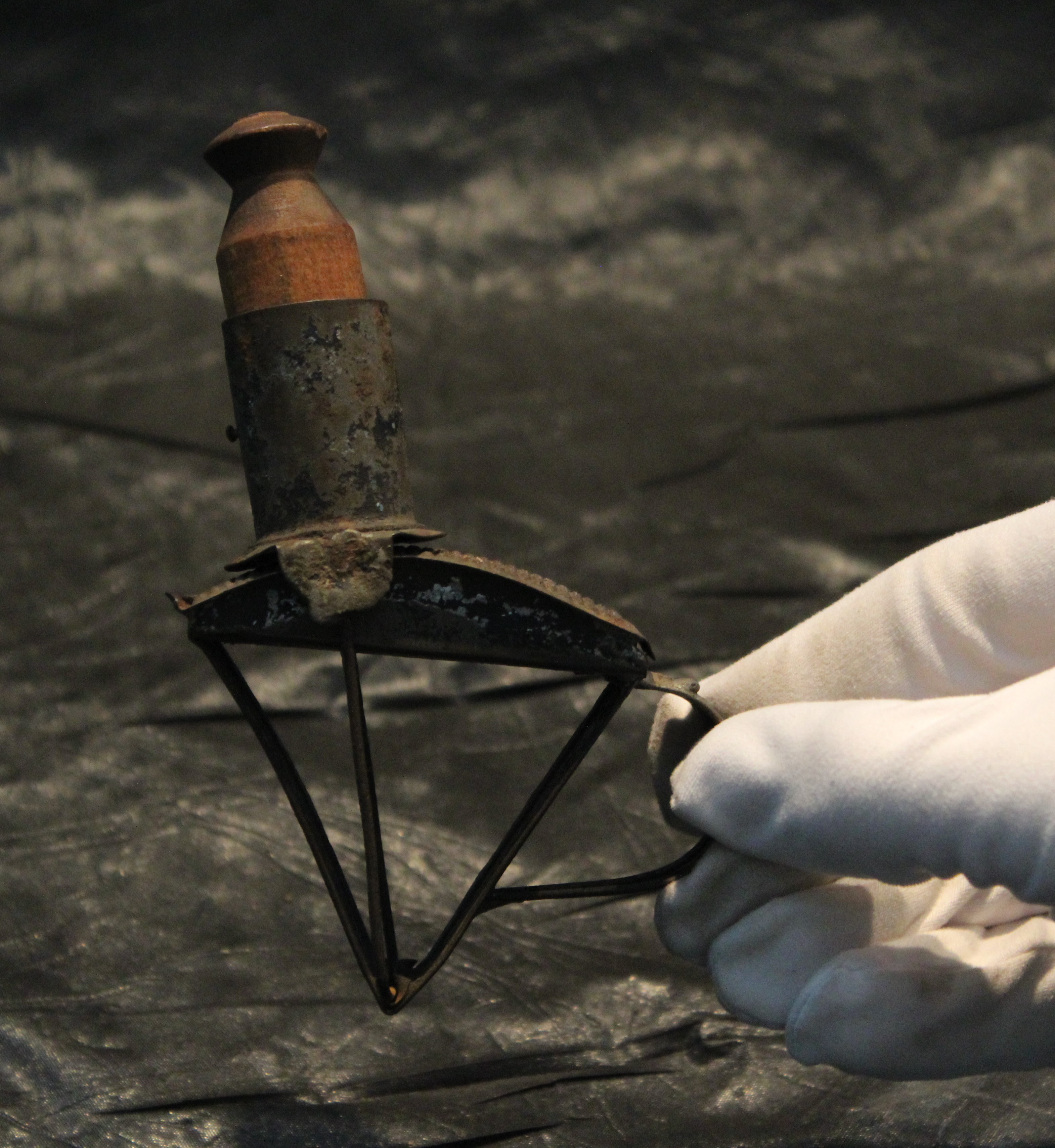 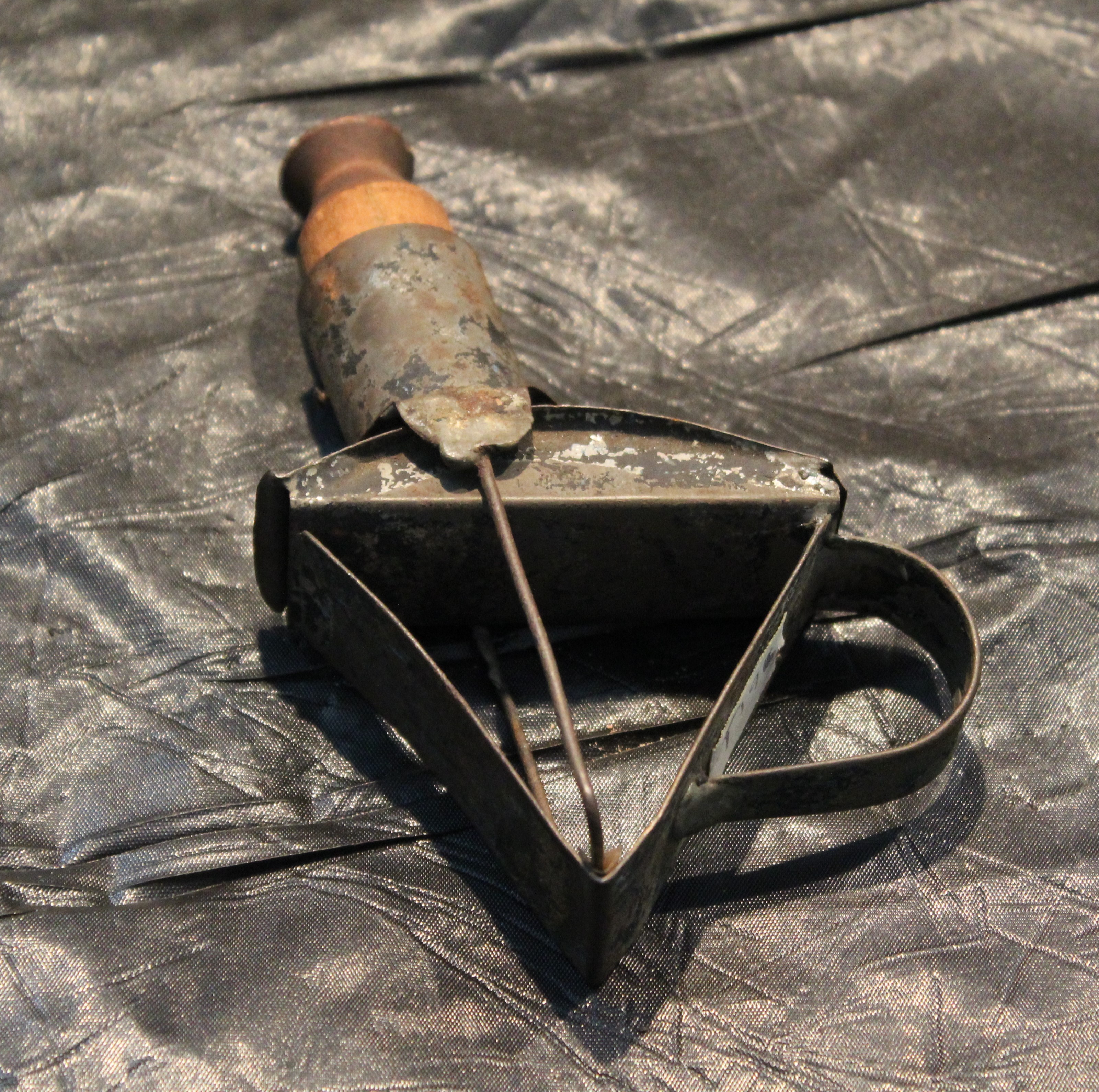