A bow saw is a woodworking tool used for straight or curved cuts.  It is a type of frame saw.  Its thin blade is held in tension by a frame.  It is a toothed blade suspended between two long narrow handles called “cheeks” that are supported by a thin stretcher in the center of the handles, making a wide “H” shape.  The blade is held in tension with a turnbuckle or a twisted cord that runs parallel to the blade between the two cheeks but on the opposite side of the stretcher.  If a cord is used, the cord, the cord is twisted with a toggle attached to one loop of the cord, adding tension.  The toggle hits the stretcher, which keeps the cord from untwisting.

Smith’s Tavern has three versions of the bow saw (none of which have identification numbers).

The frame saw or sash saw consists of a relatively narrow and flexible blade held under tension within a wooden rectangular frame (also called a sash or gate).  They are used for cutting wood or stone. The blade is held perpendicular to the plane of the frame, so that the material being cut passes through the center of the frame.  Frame saws for use with wood are rip saws operated as a hand saw.  The frame saw would need two workers to operate it.

There are two bow saws with turnbuckles that holds the tension (one hung on Panel 14 and one on the floor in front of Panel 14).  The top of this saw has a metal cable connecting the cheeks.  In the middle is the turnbuckle, which is a device for adjusting tension consisting of an oval-shaped metal piece through which both sides of the cable are screwed.  The tension could be adjusted by rotating the oval piece.  Note the wider blade and that it appears to be a one-man saw.

There are also two bow saws that have twisted cords with wooden toggles to hold the tension.  Both have very narrow blades and have handles at the bottom of each of the cheeks for operation by two workers. 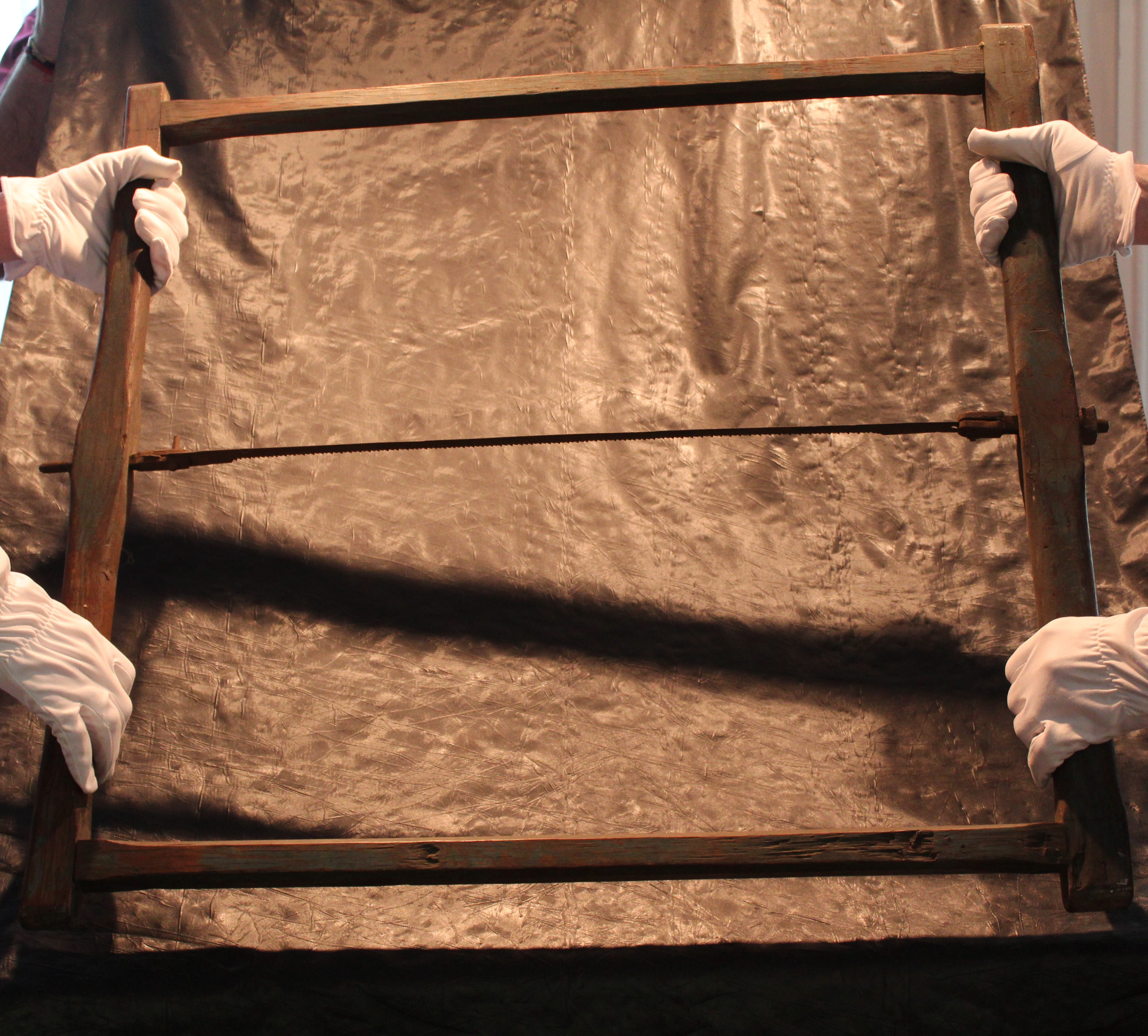 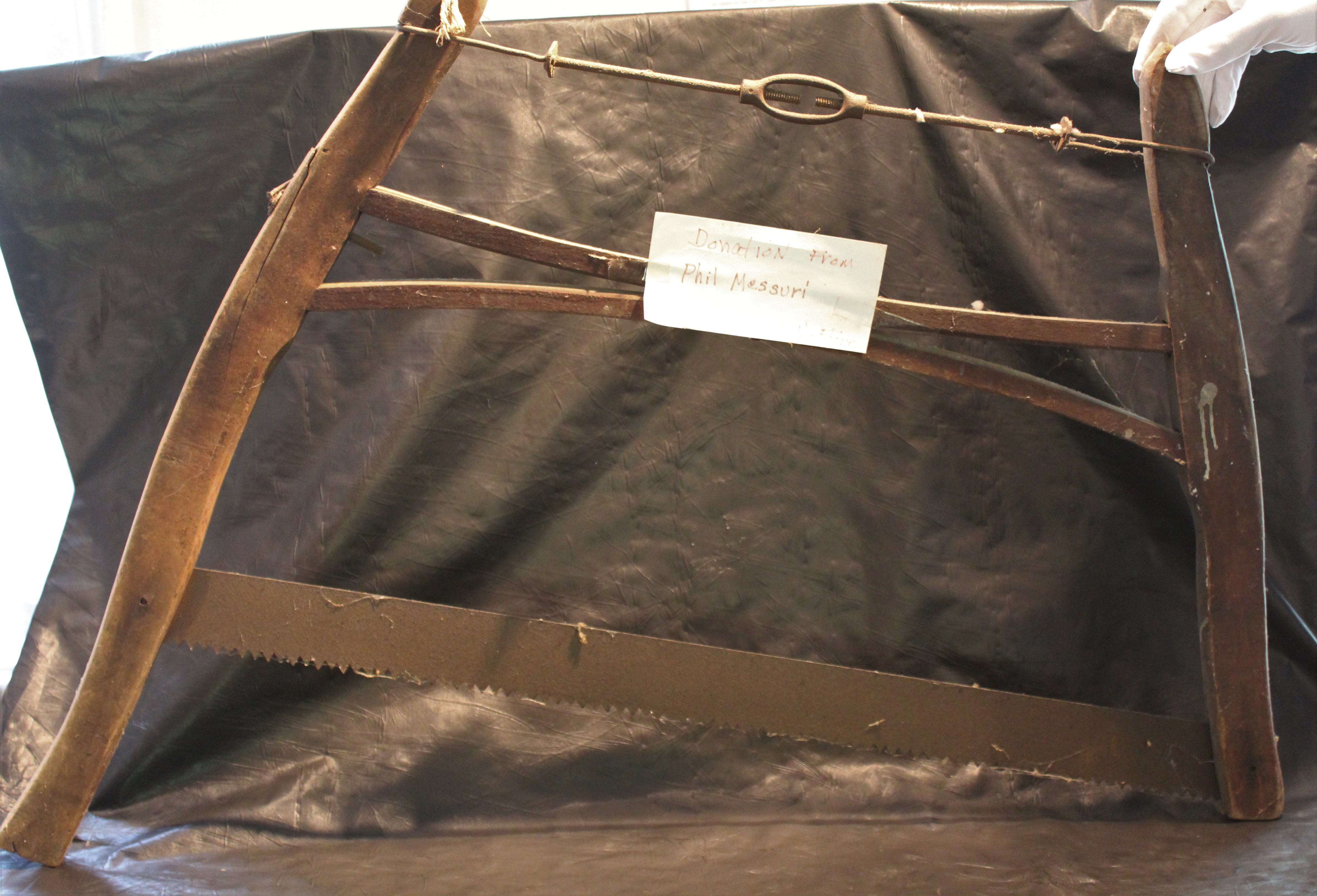 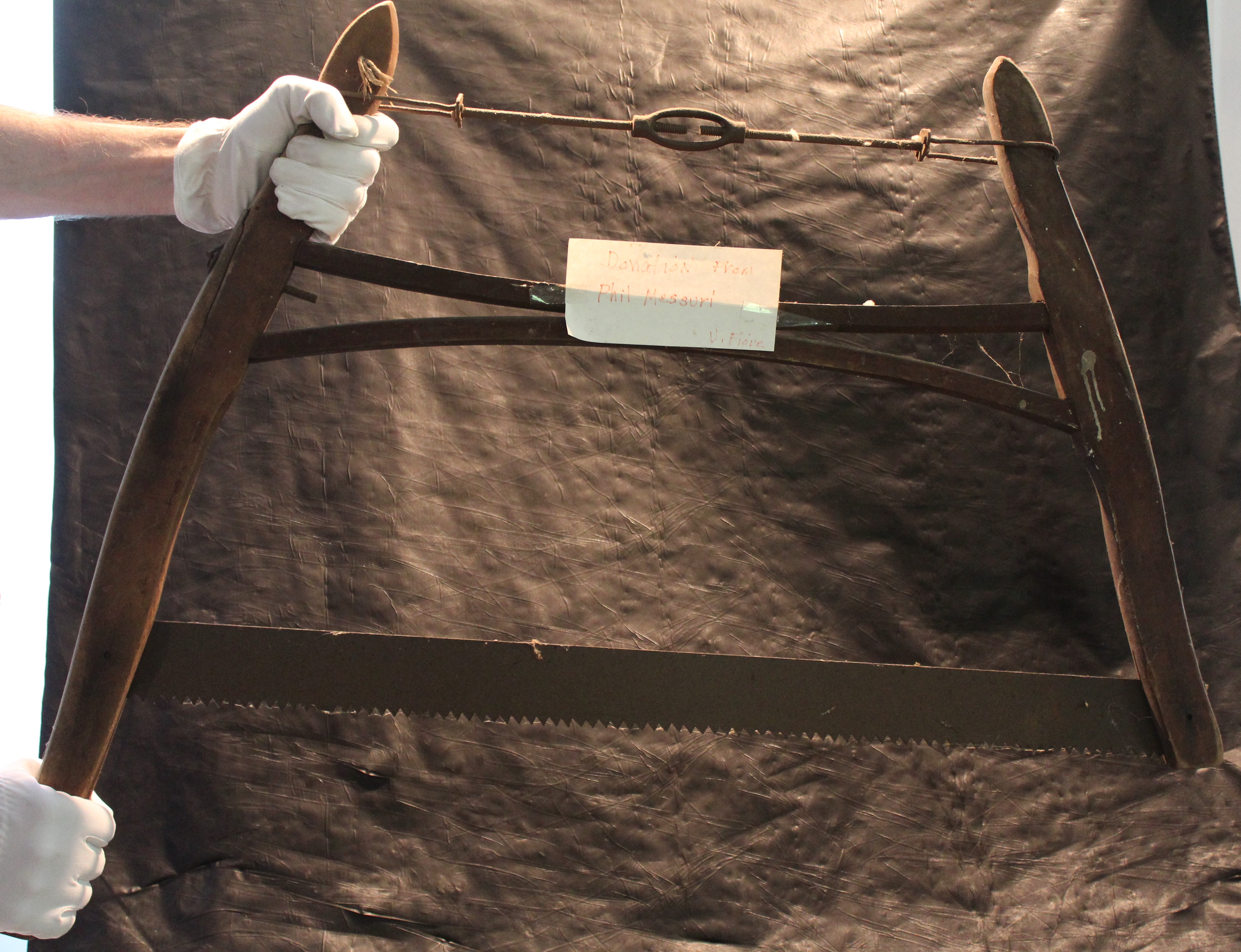 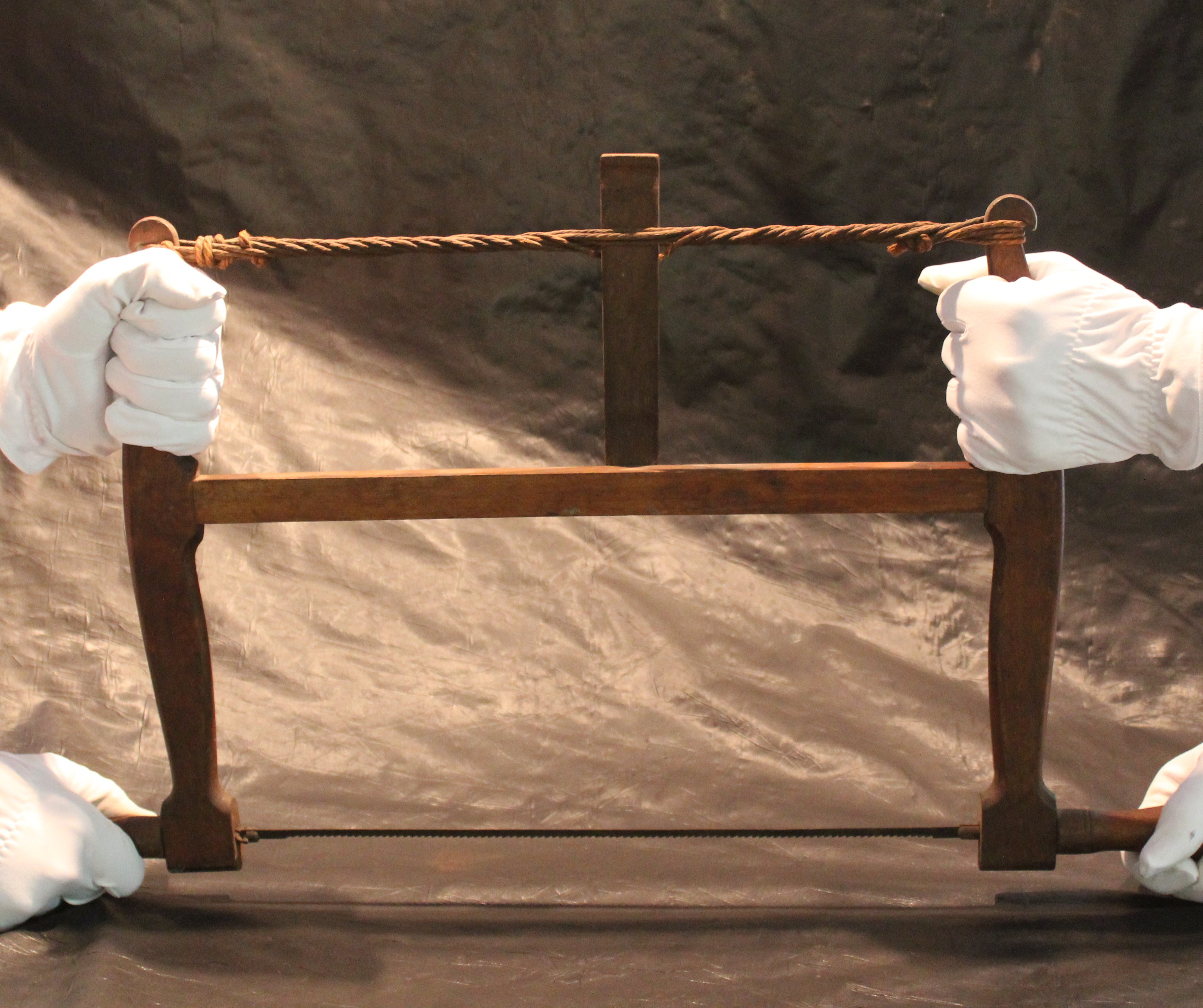 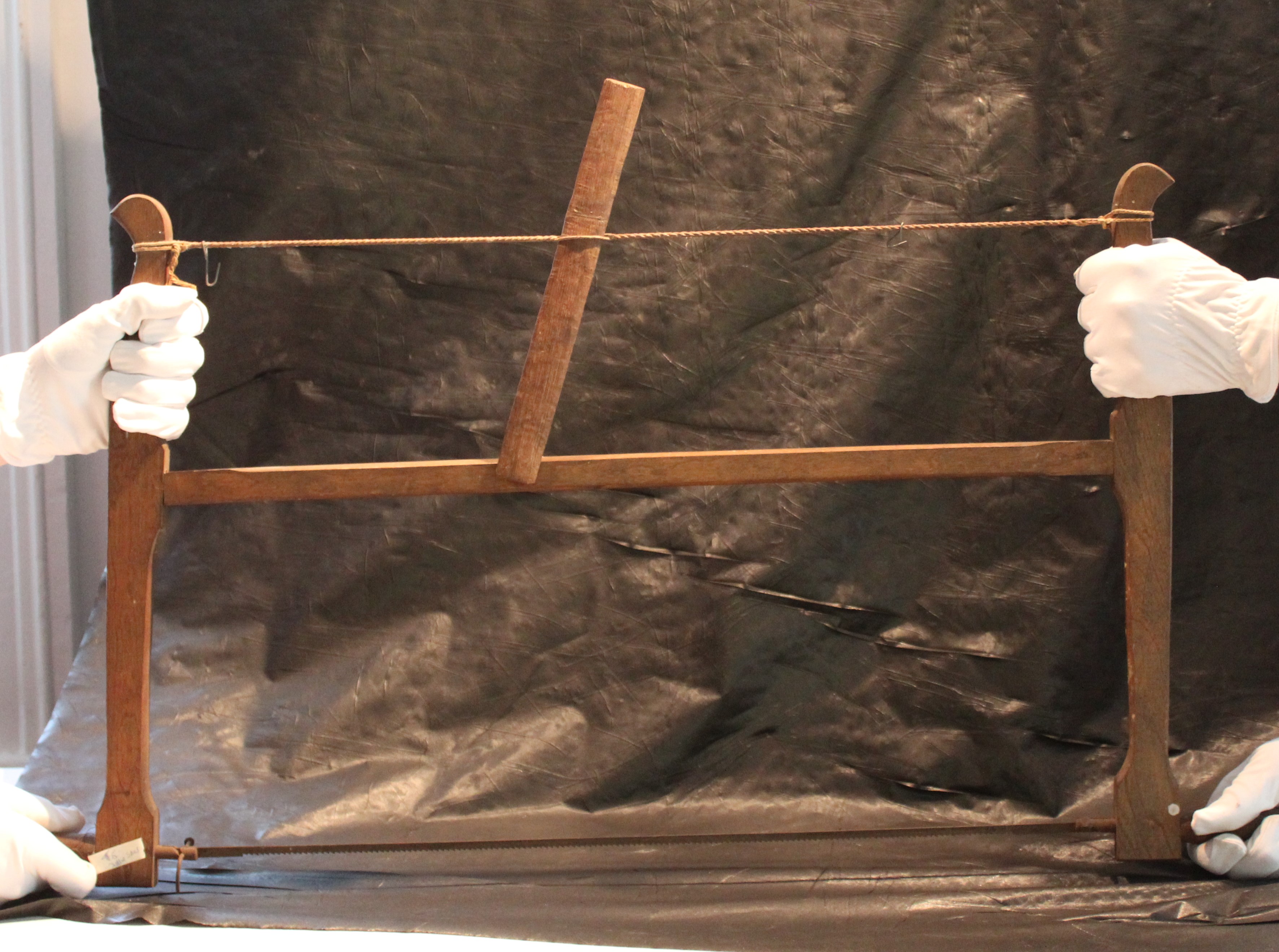