There are two tools at Smith’s Tavern for making cigars:  one wooden (T1) and the other cast iron (T252). The wooden mold is two pieces with slots for 20 cigars with a wooden peg on each end of the top piece that fits into a corresponding hole on the bottom piece.

Cigars being handmade go through a five-step process:  sorting, bunching, binding, molding, and wrapping. Sorting is when the best wrappers, fillers, and binders are obtained. They are sorted and processed by the following: color, strength, texture, resiliency, and size.  Many of these tobaccos can undergo three to four years of preparation before becoming part of a cigar. After the tobacco is processed, a “blend” is prepared for each cigar roller. A blend is a specific combination of leaves that are used to make a certain brand of cigars.  Each blend has a unique flavor that is produced by the types of tobacco leaves used. All the rollers must use the same blend to assure that all the cigars in a brand will taste the same.

After the blend is ready, it is formed into a rough cylinder of tobacco called a “bunch.”  Great care is taken to make sure that the leaves are laid in the bunch uniformly and straight.  This ensures that the finished cigar will not have hard or soft spots, which inhibit the cigar from drawing freely or cause it to, burn fast and hot.

After the bunch is created it is tightly wrapped in a coarse layer of tobacco called a “binder.”  The binder gives the cigar its structure, shape, and ability to maintain its moisture content. The bound bunch is then placed into a hardwood cigar mold (like T1) where it gets its particular shape and is open at each end of the cigar.

The mold contains approximately ten unfinished cigars and is put into a screw-type press along with other molds.  Here the cigars will further “mold” into the desired shape. Since it is smaller in diameter than the unfinished cigar to create a compression effect, a crease is noticeable where the upper and lower halves of the mold meet.  Periodically, the press is released, the molds are opened, and the cigars are rotated. This time-consuming process is performed to avoid a crease showing through the wrapper on the finished cigar.

After the cigars have been pressed and turned, they are ready for the skilled hands of the rollers.  These craftsmen take the fine, silky, elastic wrapper tobacco and stretch it around the molded cigar body.  This is the stretching and smoothing process that gives cigars their appealing looks. When a true craftsman applies the wrapper, a small rectangular piece of tobacco is left attached at the head of the cigar.  This piece is called a flag. “Flagging” is the process of molding the rectangular piece of wrapper into the head of a fine cigar.

The cast iron single cigar mold (T252), two pieces hinged together, in a torpedo-shape.  Research was unable to obtain any information specific to this item, but it must have been used for small specialty batch cigar making because making large batches with such tools would be time-consuming and uneconomical.

If anyone knows anything about this particular tool, please email the Historical Society with this much-needed information. 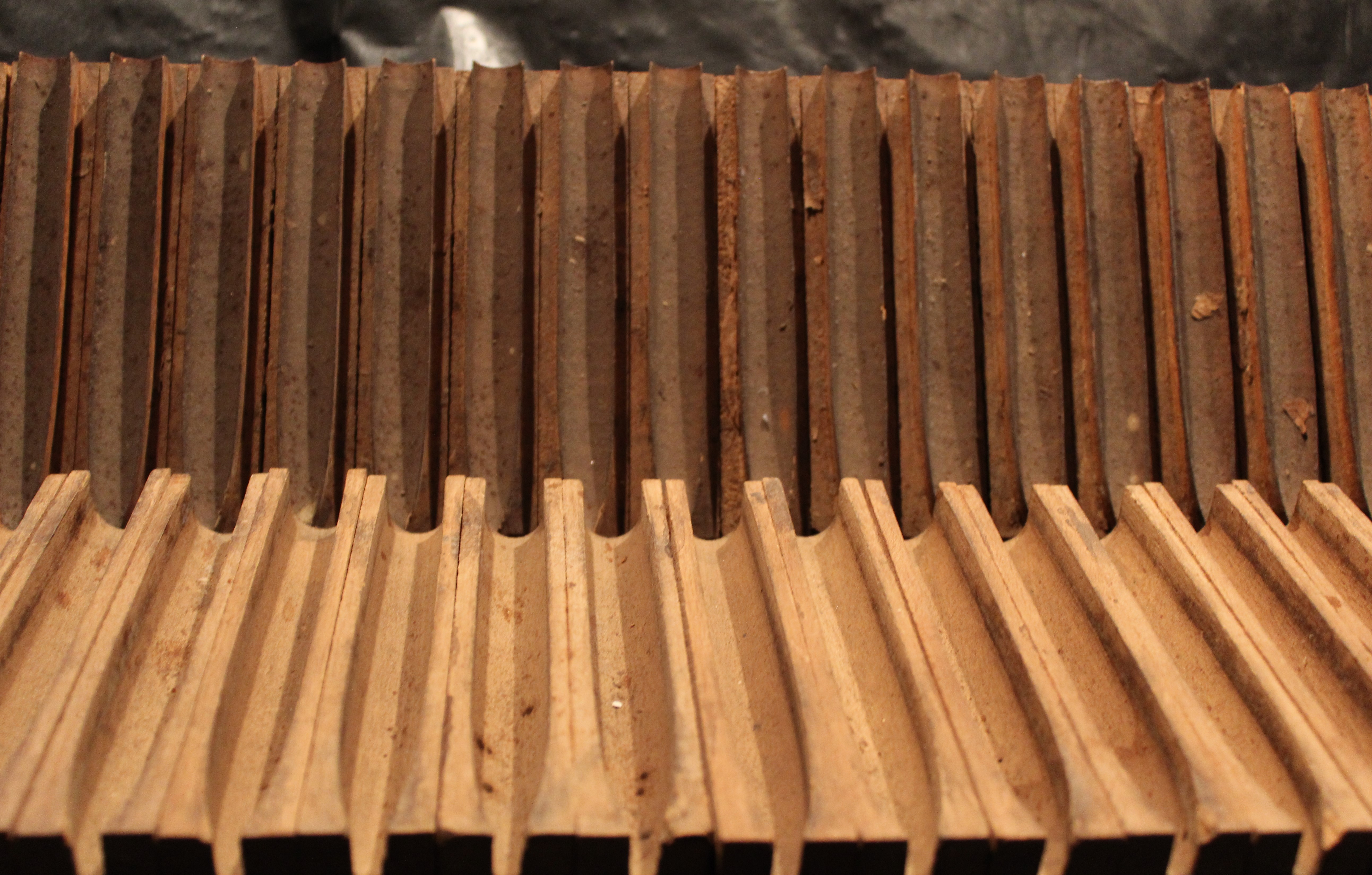 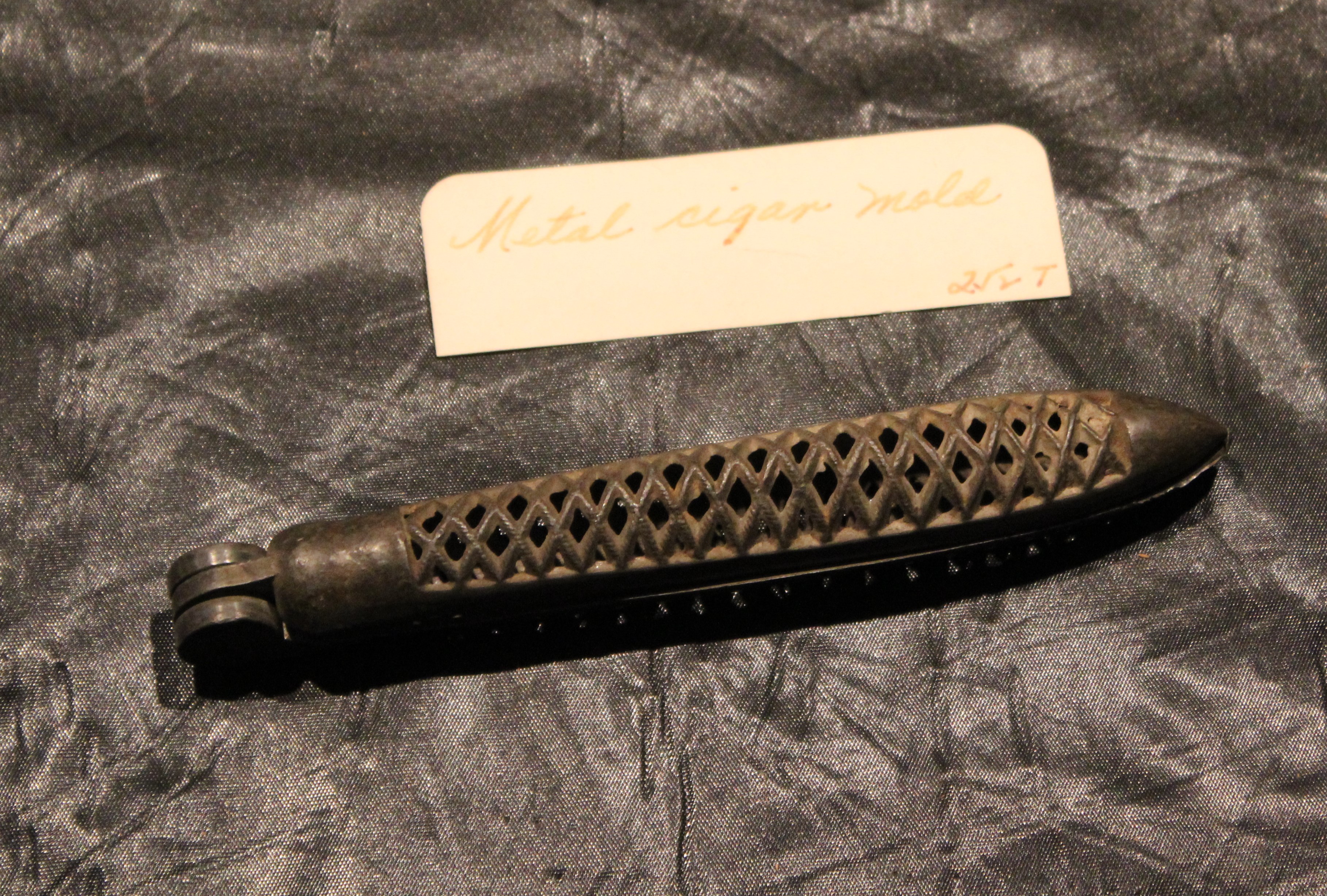