This device at Smith’s Tavern is an apothecary’s pill making machine.  It is a rectangular piece of wood, set at an angle, with brass runners on its long sides with sets of brass grooves across the width of the board near one end and a slight drop-off into a collection tray.  There is also a two-handed paddle handle that fits onto the brass runners with two metal brackets between which is an additional brass grooved piece.

This device dates back to the days when the local pharmacist or apothecary bought, sold and manufactured all his own drugs, medicines and curatives to everybody who lived within the bounds of a given community.  On a day-to-day basis, most poor and middle-class people would visit the pharmacist or apothecary for the majority of their healthcare needs.

Even if they did go to the doctor, he’d write out a prescription and the instructions he generally gave were to take the script to the apothecary and have the medicine made, which the apothecary would’ve done anyway, even if a doctor wasn’t involved.

Every tablet, pill, suppository, ointment, potion, lotion, tincture and syrup to treat everything from a sore throat to fever, headaches to constipation, was made laboriously by hand, by the pharmacist.  They would draw on the centuries of accumulated knowledge passed down from master to apprentice, over countless generations. This knowledge foretold of which plants, herbs, roots, leaves, barks, piths, saps, syrups, foodstuffs, and various animal parts, had healing properties.  It was knowing how to find these ingredients, how to identify them, how to use them and what they did, which was the biggest part of being a pharmacist or apothecary. Old apothecary shops were famous for having dozens, hundreds of jars, bottles, and drawers, all filled with plant and animal components, all of which were used for treating illnesses.

Once the necessary ingredients for the pills had been measured, crushed, ground and pulverized, a final ingredient was poured into the mortar – syrup.  The syrup wasn’t there to sweeten the mixture, it was there to act as a binding agent. The syrup was mixed into the powder until the entire thing coagulated into a paste or doughy mixture.  Then it would be scooped out and rolled into a snake or sausage shape.

The large flat surface is for rolling out the pill-paste into the sausage.  This is then rolled towards the brass cutting-grooves. The paddle (the second piece) is flipped over so that the grooves there line up with the grooves on the board.

Rollers on the ends of the paddle roll against the brass edges of the board, and they guide the paddle straight across the grooves, taking the pill-mass with it.  The grooves on the paddle and the board slice up the pill-mass and, after rolling the thing back and forth a couple of times like a rolling-pin, the circular pills roll off the grooves and into the tray at the bottom. 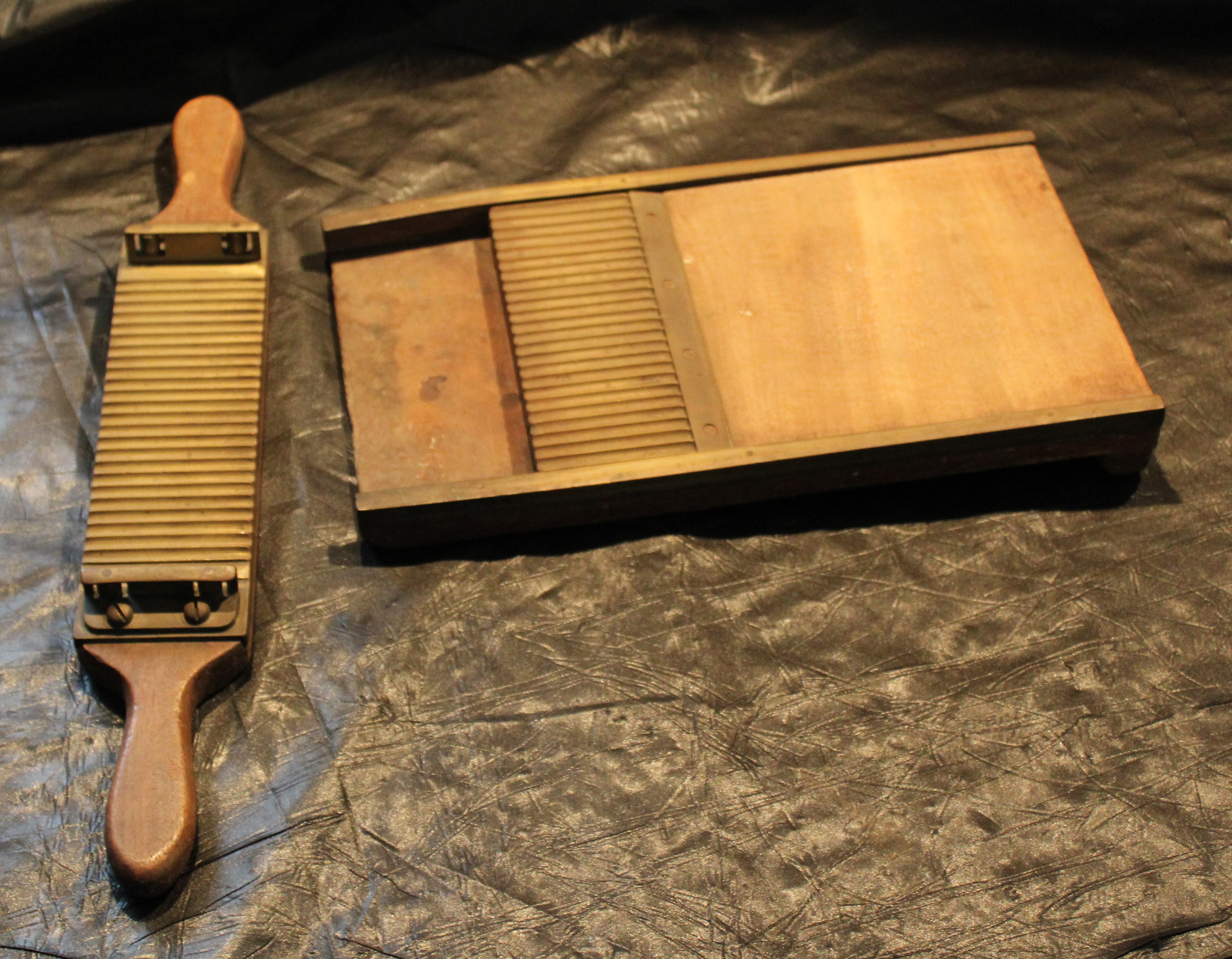 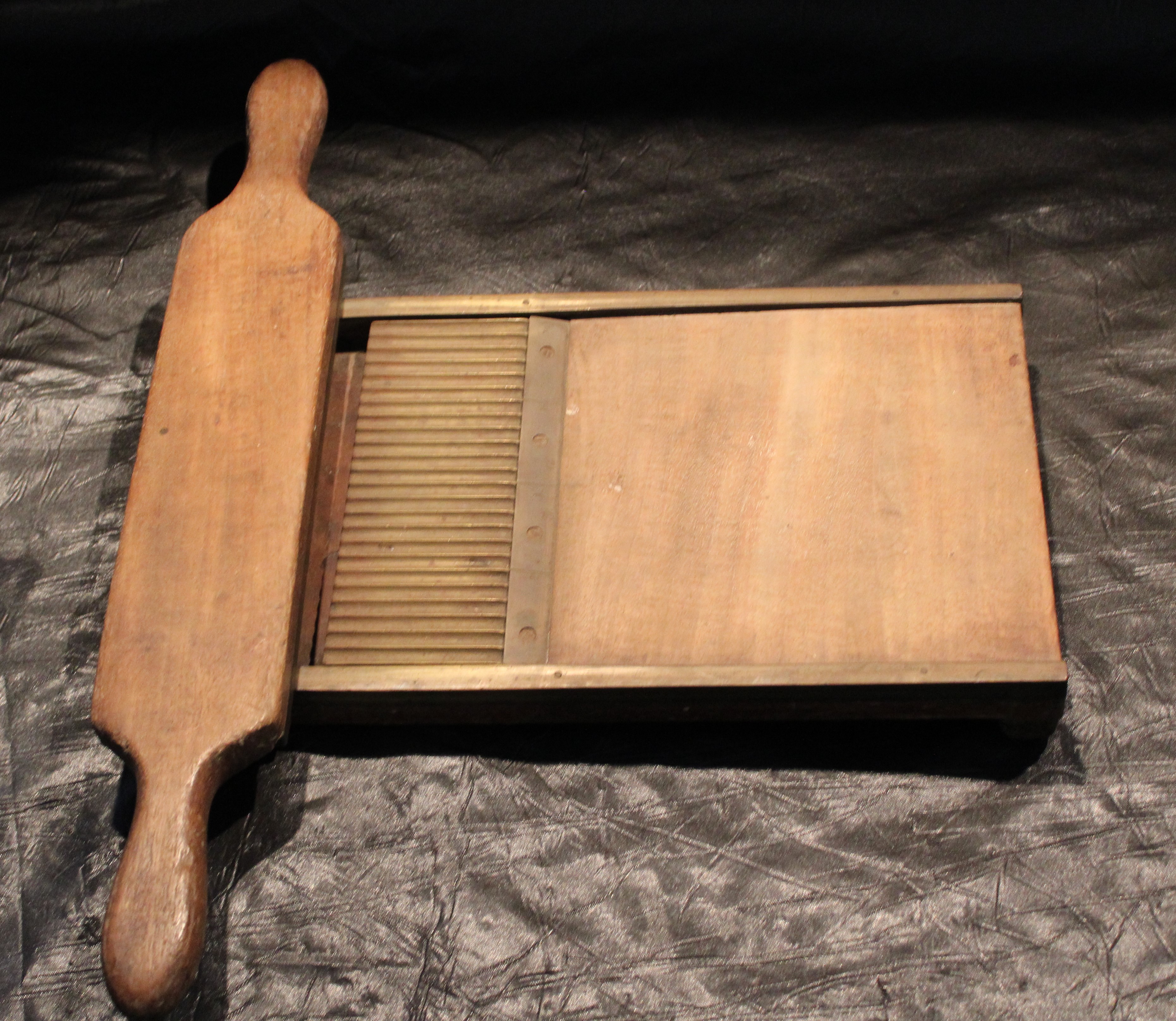 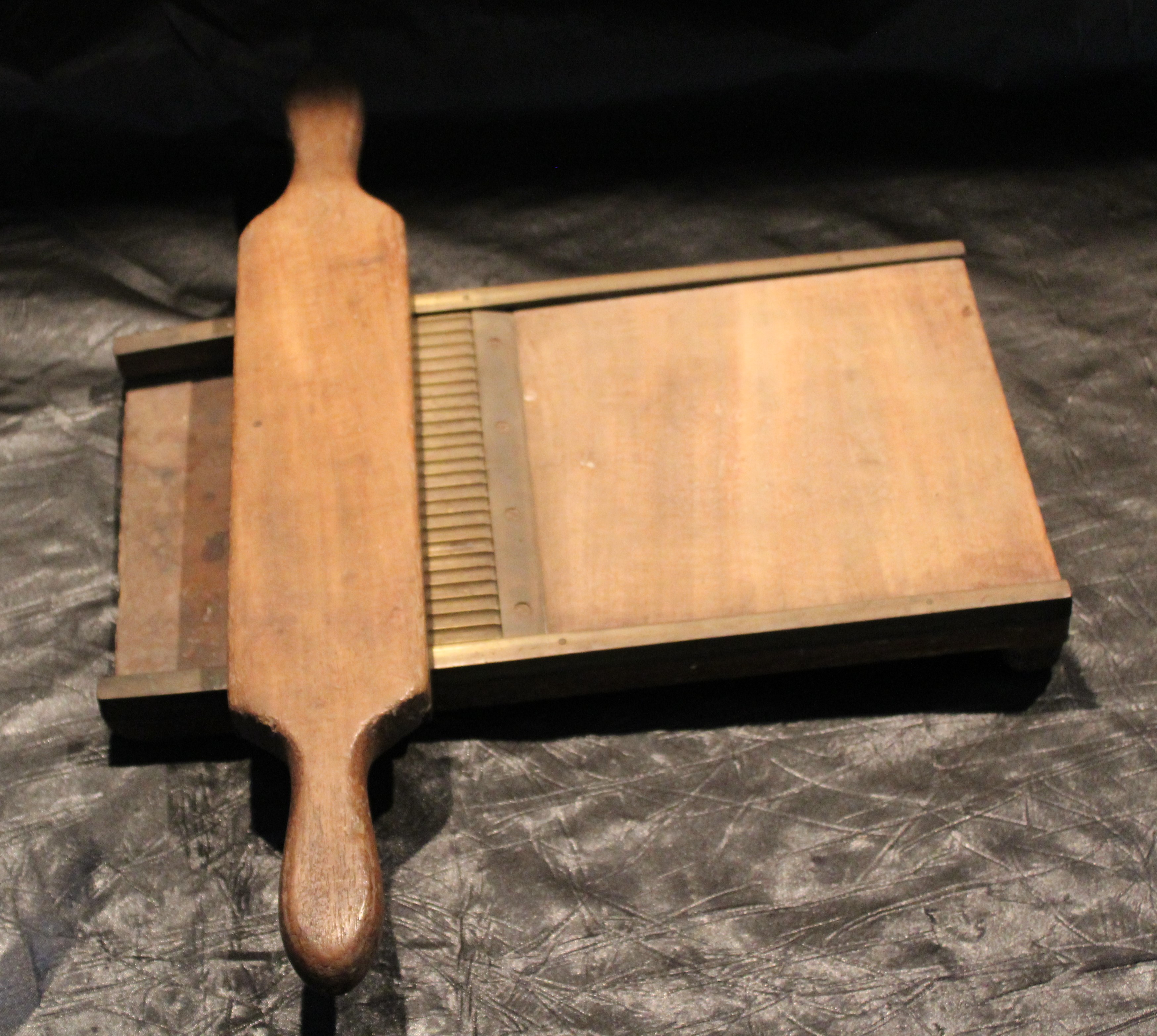